Price is as per gram

Purple Sour Diesel is a powerful combination of Sour Diesel and Purple Kush. Recommended for after-hours smoking, Purple Sour Diesel can pack some potent psychoactive effects along with a lighter physical high. The bouquet is fruity and, as the name would imply, can cross over into the sour zone. A THC content ranging from 15% to 21% rounds out the profile of this pungent strain. 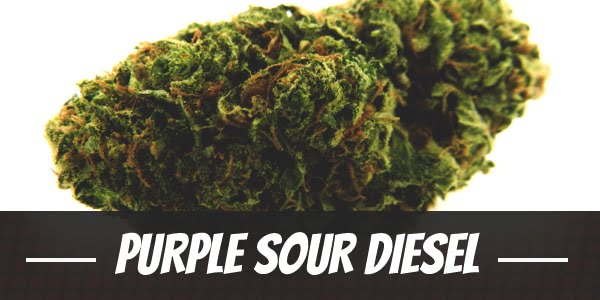 As fun to smoke alone as it is when shared with friends, Purple Sour Diesel makes a good conversation piece thanks to its upbeat energy and eye-catching flowers. This holistic strain is a must-try for indica and sativa lovers alike.

Purple Sour Diesel is a fast-acting, heavy-hitting hybrid. A cross between a sativa, Sour Diesel, and an indica, Purple Kush, Purple Sour Diesel embodies the full force of both strains. Great for nighttime smoking, this strain has a quick onset and a distinctly medicated feel. Featuring heavy head effects and a slight body high, Purple Sour Diesel will energize your mind while leaving you physically relaxed. This strain features a sour, fruity aroma similar to sour grapes. 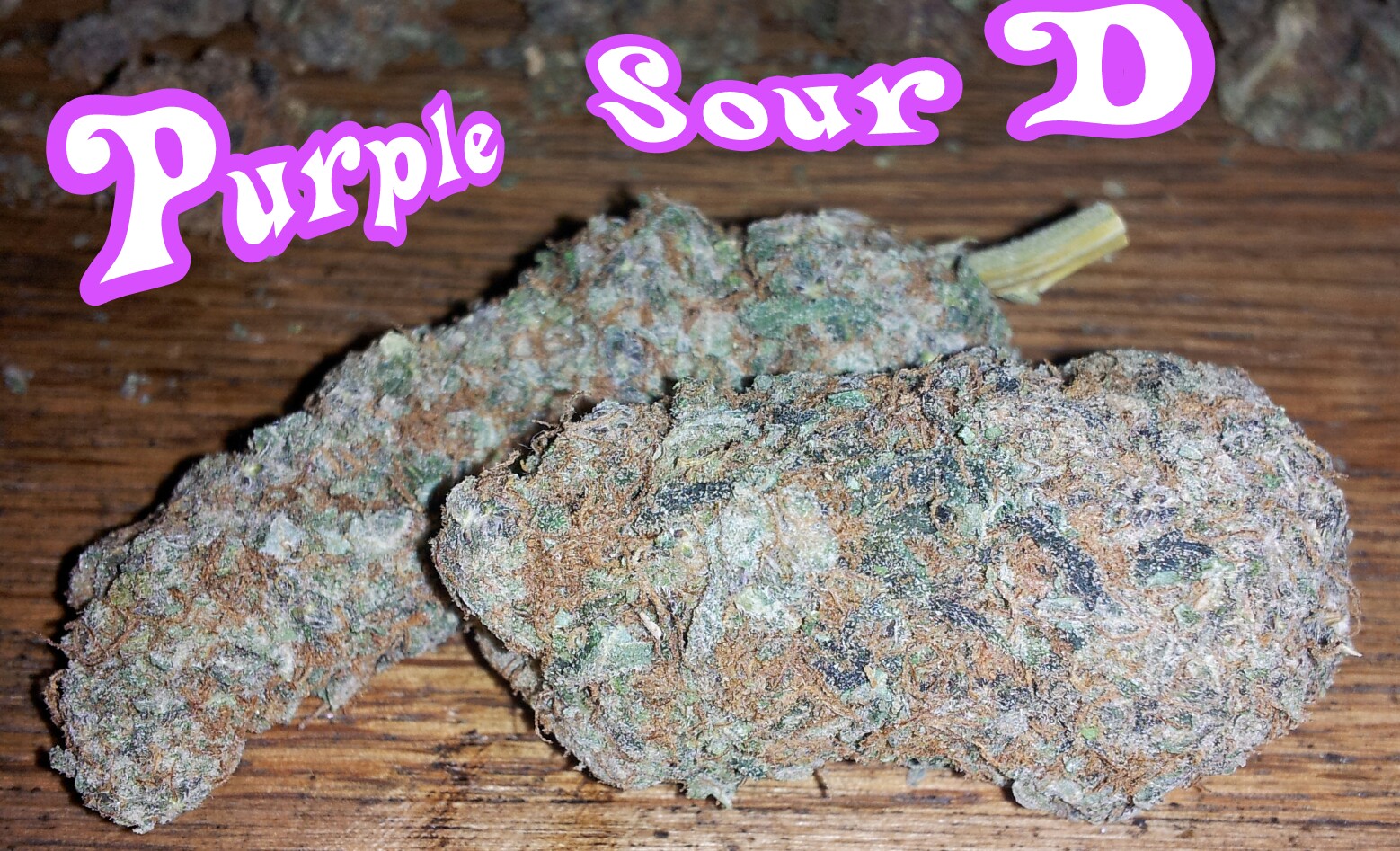 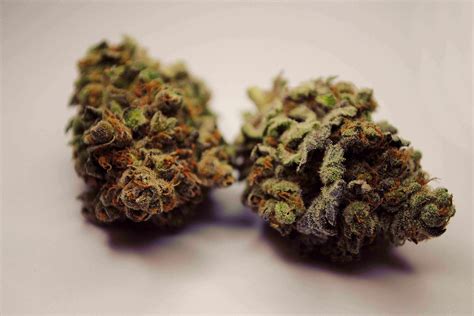 Purple Sour Diesel is a well-balanced strain with colorful leaves and a knockout pungency. It is a cross between two very popular strains: stinky sativa Sour Diesel and indica Purple Kush. With a long-lasting potency that’s sure to impress cannabis novices and veterans alike, Purple Sour Diesel makes an excellent all-purpose smoke. If you’re carrying it around in public, though, you may want to double-bag this smelly bud. Its THC content has been measured at between 15% and 21%.

Looking for more information on Purple Sour Diesel is difficult due to the lack of information. But what we are sure of is what this strain could do. Notice too that it has the word diesel in its name, and immediately the first thing that comes to mind is how it smells and tastes. 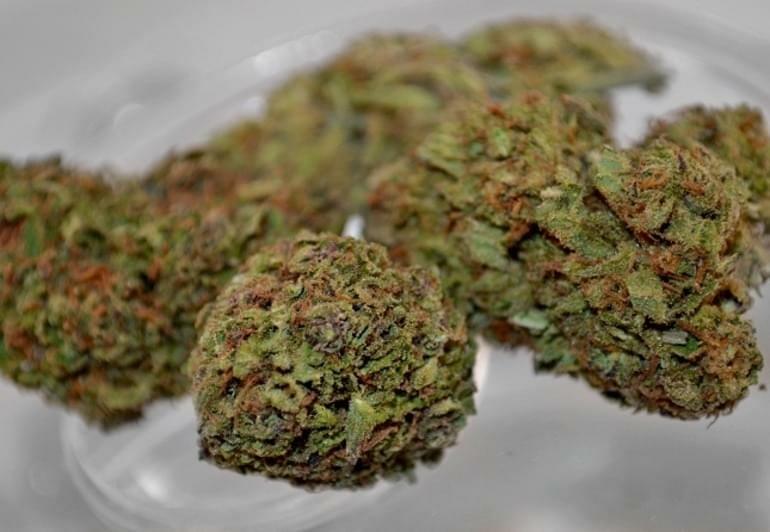 Purple Sour Diesel’s impressive flowers immediately catch the eye with their piecey, multicolored leaves. The large flowers are medium to large in size and hold together in a spadelike formation, similar to mini pinecones. The buds have a dense, indica-typical structure at their core, with small leaves that spiral loosely outward at their fringes in a more sativa pattern. The leaves themselves are an almost equal proportion of green to purple; the latter color it thanks to the influence of Purple Kush, which passes on its high concentration of anthocyanin pigments.

As to be expected, it has a fragrance that for some people, might take a little while to get used to, and when they do, the love affair begins. BUT when it comes to how Purple Sour Diesel works, it is love at first sight, or rather, love at first high.

Being a Sativa-dominant strain with an above average THC levels, the mental head high it gives is something you are going to crave for.

Purple Sour Diesel takes effect very quickly, sometimes striking the consumer before they’ve even stopped coughing on its acrid smoke. At first, it exerts a concerted pressure around the temples and forehead and may cause a flush in the cheeks or a sudden head rush. Once they adjust to these odd sensations, consumers may notice that their thoughts have taken on a faster pace. Ideas and concepts may ramble from one to the next in free association and can occupy more attention than they ordinarily would.

This kind of cerebral energy can be harnessed to follow through on complicated, work-related tasks, as well as for more open-ended creative pursuits. It can also have some social benefits, as its amplification of inner monologues can lead to chattiness, even among strangers. After some time, Purple Sour Diesel’s mental stimulation starts to give way to a progressive body melt. Smokers may feel their eyes start to droop as any lingering muscular tension begins to unravel.

Although the bud’s cerebral clarity tends to persist even as consumers become progressively more relaxed, they may be stripped of any prior motivation to get things done. At this point, the combination of physical and mental stimulation can be a good way to enhance activities that involve complex coordination, including playing video games and exercising. In the proper set and setting, Purple Sour Diesel can even be an aphrodisiac.

If the dosage is increased, be prepared for this hybrid’s body melt to dull the senses and bring on some couchlock. Because of its slow burn from buzzy stimulation into thorough relaxation, Purple Sour Diesel is best toked between late afternoon and early evening.

When properly cured, flowers of Purple Sour Diesel release strong diesel fumes. There’s also a slight fruity citrus aroma lurking underneath. Grinding up the buds gives off a hashy and spicy scent. When combusted in a pipe or a joint, Purple Sour Diesel burns with a harsh smoke that may tickle the palate and sinuses. This sharp, thick smoke has a grassy, chemical-like taste on the exhale.

Purple Sour Diesel is a potent sativa-dominant strain with the genetic makeup of an inbred Sour Diesel sativa and an indica known as SR71 Purple Kush – itself a blend of original Hindu Kush and Purple Afghani. With a sativa/indica ratio of 70:30, it delivers a major energy boost with a heavy dose of euphoria and creativity. The high is intensely cerebral, with more limited body effects, though the strain is quite relaxing physically. THC levels reach as high as 21% in this strain, putting it in the top tier of powerful strains.

Purple Sour Diesel is an especially effective treatment for long-term pain, as well as anxiety and depression. It can also be used to relieve nausea and induce hunger, and despite its sativa background, many patients find it helps them sleep. This strain has a sour, fruity aroma similar to sour grapes, along with a pungent earthy flavor. The buds have a dark purple appearance and are covered in a thick layer of trichomes. Like other diesel varieties, this strain has a distinct diesel flavor and smell. Purple Sour Diesel is most popular in California, Washington, Arizona, and Michigan.

Boy, does the Purple Sour Diesel get to work as soon as the first couple of puffs. This strain rushes in a cerebral head high that on its onset, makes you feel like having a halo on top of your head. Immediately, you feel uplifted and as your mood swings to the positive side, the overwhelming sense of happiness could even lead to the point that you feel euphoric. A good thing about Purple Sour Diesel is that it does not take you to dreamland. Rather, it gives you a boost of energy to feel like you are on top of the world.

While it is a Sativa-dominant strain, the Indica properties soon follows as it brings your body to a state of relaxation, making for a nice blend of mental and body high.

Contrary to the impression of many people, Purple Sour Diesel has an underwhelming pungent odor that is distinctively a mix of sour diesel with a sweet undertone of grape. Because it is mild, that makes it more pleasing.

Definitely, this strain is not smooth when smoked. At the same time, where it is mild in its odor, the taste of sour diesel is more pronounced with the sweet taste of grape lingering as you exhale. Some users have reported that Purple Sour Diesel actually tastes better as you smoke it.

The good thing also about using Purple Sour Diesel is that there are not much negative reactions that is a worrisome. And worrying is the last thing on a cannabis user’s mind for the most common reason for smoking is to feel good.

You might expect to have dry mouth and dry eyes when smoking this strain. Other concerns are rare and they include paranoia, headache, and anxiousness. These are pretty much nothing to be concerned about unless this is the first time you are using cannabis and have no idea what to expect. At the same time, overusing cannabis is never a good thing and doing so is when these rare reactions might manifest.

Even with an intense onset of the Sativa side in giving you a buzzing head high, the balanced mental and body high that follows soon after benefits medical cannabis users. Purple Sour Diesel is sought after for its ability to reduce tension and stress. Even better, it is not known to elevate stress and anxiousness like some other strains do. As such, it is beneficial to those who have anxiety disorders including depression.

A few other uses of Purple Sour Diesel include relief from pains and aches. Although it has a low CBD, which might not be helpful in extreme cases, but those with mild cases will appreciate its effectivity.

After an invigorating cerebral high, you might also feel tired and sleepy. This is great especially for those with Insomnia.

This versatile strain may also find some utility among medical cannabis patients. It can enable focus and concentration for those with attention deficit disorders. It may also temporarily take the edge off of mild to moderate cases of stress and depression.

Physiologically, Purple Sour Diesel can soothe pain, whether it’s chronic, as in the case of serious illness, or more common, like indigestion. Because its early effects can be very cerebral and bring about intense, recursive patterns of thinking, Purple Sour Diesel is not a good option for patients who are prone to panic or who have a low tolerance for THC.

Fortunately for home growers, seeds of Purple Sour Diesel can be purchased online. Once obtained, the strain can be grown indoors or out, although successful outdoor cultivation requires a semi-humid climate with consistent daytime temperatures between 70 and 80 degrees Fahrenheit.

This strain’s plant tend to grow medium-tall and may need to be pruned back somewhat to fit in limited indoor grow spaces. Gardeners looking to accentuate Purple Sour Diesel’s signature shades of purple should briefly expose their plants to nighttime temperatures between 10 and 15 degrees below average, just before flowering begins. This strain flowers within 9 to 10 weeks when grown indoors.

Purple Sour Diesel can be grown in both outdoor and indoor, as well as in a greenhouse. While it does thrive well in an outdoor environment, it is recommended to grow this indoor.

The advantages of having your own indoor growing tent and equipping it with a good lighting source, as well as other accessories, provides for a controlled environment that makes the tedious task of growing Purple Sour Diesel easier. It is also highly adaptable to the Screen of Green (ScrOG) method.

If you want to get your hands on your own harvest, then you will have to wait for 63 to 75 days, when it starts its flowering stage. Soon after, be delighted with a yield of 14 ounces per square meter.

Looks like you are committed to doing whatever it takes to grow the Purple Sour Diesel outdoor. For all the attention and care you give into making sure that your cannabis plant receives the best experience in growing up, you are rewarded with a yield of 18 ounces per plant by the middle part towards the last days of October.

Have you ever smoked or grown your own Purple Sour Diesel? Please let me know what you think about this marijuana strain in the comments below.