Holy Grail Kush is an award-winning indica-dominant strain that’s known for its uplifting and calming effects. It’s an excellent option for those looking to also reduce pain and de-stress.

Holy Grail Kush, as the name suggests, is a DNA Genetics Indica-dominant masterpiece that took top prize in the High Times Cannabis Cup of 2011 in the Hybrid category. It is said that Holy Grail Kush, also referred to as Holy Grail OG, is the first strain to receive a perfect score in the category. 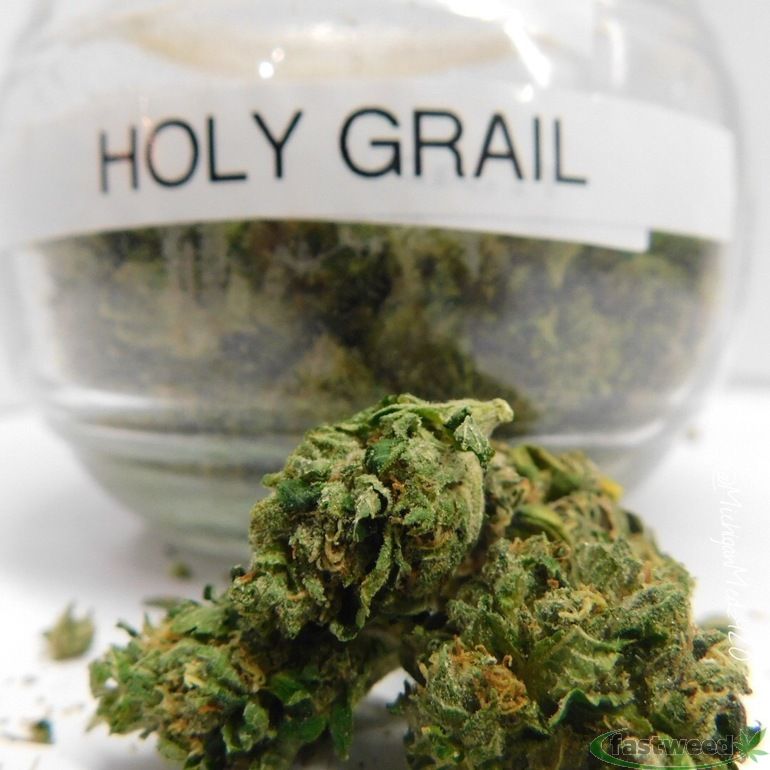 The strain inherits a thick piney and citrus aroma and taste from its father, “The OG #18”. Its maternal strain is Kosher Kush, a strain that produces a myriad of effects in both mind and body that can be calming and uplifting.

It’s a high-yield hybrid that was awarded first place, achieving the first-ever perfect score, at the 2011 Cannabis Cup for Best Hybrid By a Seed Company. 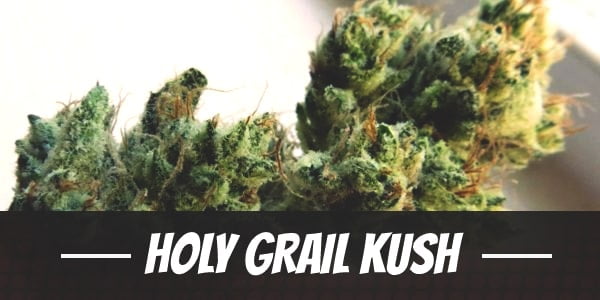 While renowned for its potency, Holy Grail OG reportedly produces a pleasant, mellow high that is perfect for relaxing, getting creative, or getting ready for bed.

This strong indica-dominant hybrid, which has a Sativa/indica ratio of 40:60, packs THC levels of as much as 24%, one of the most potent options on the medical market. That power makes Holy Grail Kush a good choice for treating a wide range of conditions, including anxiety, cramps, nausea, nerve pain, and chronic bodily pain. The body high, which is both relaxing and euphoric, is a sure ticket to a good night’s sleep. But CBD levels aren’t nearly as high as THC, registering at well below 1% in some tests. 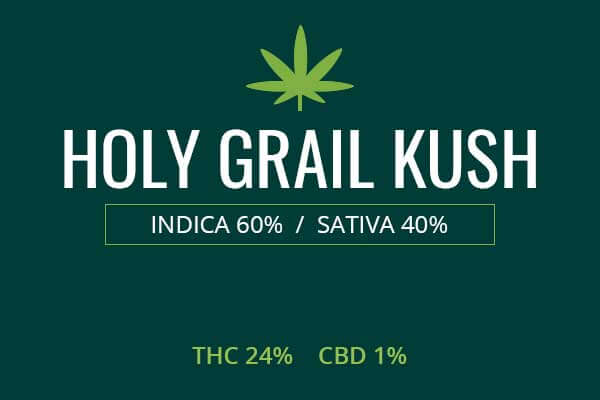 That means Holy Grail Kush shouldn’t be used as a front-line treatment for seizures or other health problems that respond to CBD. Likely adverse effects include cottonmouth and watery eyes, though paranoia is also widely reported. This strain has a distinct coffee flavor with notes of lemon and lime while the smell is earthy and woody with hints of pine needles. Holy Grail Kush is a cross of OG #18 and Kosher Kush and is most easily found on the legal medical markets in the American West, specifically California, Washington, Arizona, and British Columbia.

Cannabis breeders love using names to hype their creations, but Holy Grail Kush (also known as Holy Grail OG and Holy Grail) almost pre-programs resentment. If God’s Gift were called something else, it’d still be a weak strain, but at least I wouldn’t have so much disdain. I’m not even religious but just chill on the salesmanship.

Holy Grail Kush isn’t a total fraud like God’s Gift, though. The stiff nighttime strain exudes Big Kush Energy, packing thick hints of pine, citrus, and Eastern spices on the way to sustained relaxation, munchies, and pain relief for the majority of users. Having such a distinct purpose is valuable in the cannabis world, especially for occasional smokers who expect about of hungry-happy-sleepy when they light upon a random Saturday night. But is it really the Holy Grail of Kush? For some, it actually might be.

Mainstream culture would have us believe the Holy Grail of anything is the universal best, but the disintegrating Nazi in Indiana Jones and the Last Crusade showed us that the Holy Grail could be more sturdy and unassuming. The take from DNA Genetics, breeder of Holy Grail Kush, is obviously the former, boasting heavy potency, yield, and Kush characteristics along with an intimidating pedigree of Kosher Kush and OG Kush #18, a sour, calming OG phenotype. Toke wisely, or you might disintegrate, too. 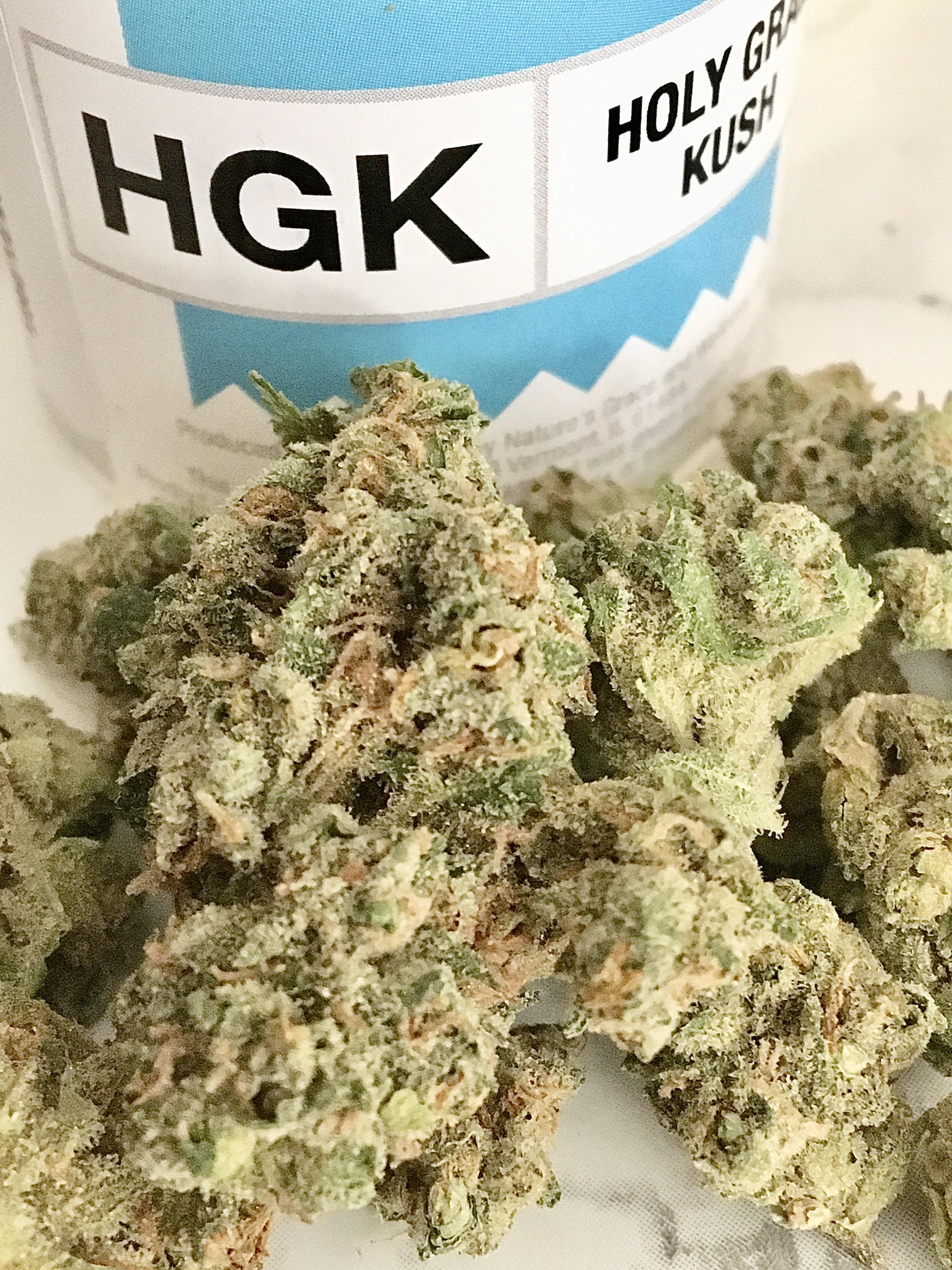 Holy Grail Kush won the 2011 High Times Cannabis Cup back when that really meant something, and now carries a reputation for knockout power across the country. Regular users keep it locked in the cupboard for after-hours and self-medication, like a more nurturing bottle of good whiskey. A sour, piney smoke with hints of lime, cardamom, and peppercorns brings the flavor without being overly sweet or skunky, and growers like the strain for an above-average yield and buds that are easy on the eyes. Afghani, Hindu, Bubba, OG, and a few other timeless Kushes all have a more solid claim to the throne, but Holy Grail Kush grades out right there with them.

Holy Grail Kush is an indica-dominant strain that is the culmination of Kosher Kush and OG #18. Kosher Kush bequeaths a bit of its potency as well as its sweet, spicy, and refreshing pine profile. At the same time, OG #18 has given up a bit of its audacious and long-lasting verve and euphoric bliss. The result is a strain that has not only energy inducing highs but a sublime and uplifting effect.

Although Holy Grail Kush induces a cerebral and creative lift, users cite this strain’s ability to soothe stresses and quell restlessness and insomnia. Its rapid-fire punch of THC makes users feel physically relaxed but eases users to a good night’s sleep without the incursion of severe couch lock.

What Is the Holy Grail Kush Strain?

The Holy Grail Kush weed is from the breeders at DNA Genetics in Amsterdam. Although it is indica leaning, it showcases some of its sativa qualities. It has some vibrant and energizing effects, but its penchant towards a sedative state also includes a hefty dose of chronic pain relief.

Headache and migraine sufferers may use this strain to address their issues. Those experiencing other disease-related symptoms such as nausea and vomiting may also notice a reduction in their physical discomforts.

Those with symptoms related to major diseases and disorders such as depression and anxiety, indicated a happier state of mind. They also cited feeling more content and an increased ability to resume daily tasks. Many users also state that this strain is perfect for anyone needing a creative boost. Its impact may remove mental blocks and cause a burst of inspiration. 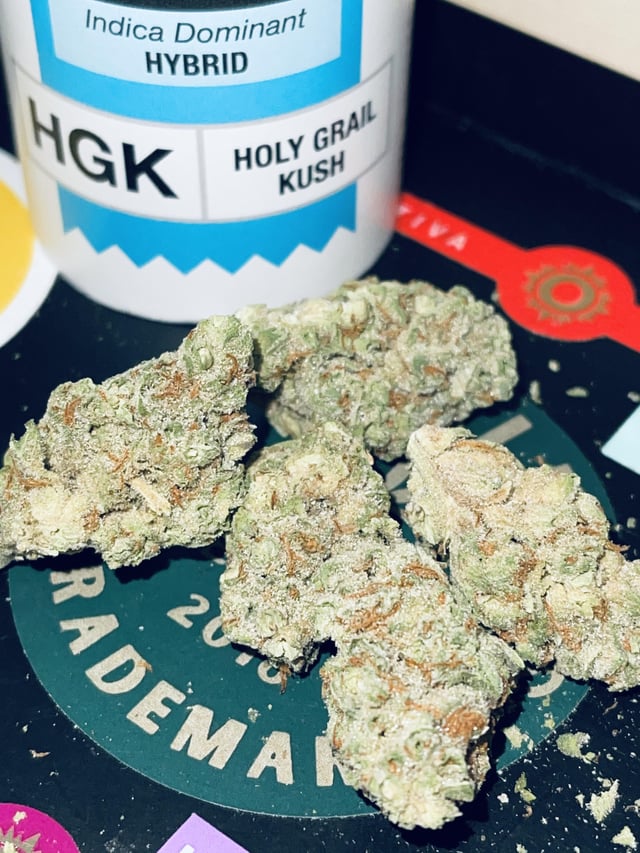 With such an illustrious background, it’s no wonder why this strain has won both accolades and awards. Holy Grail Kush was the winner of both the Spannabis 2012 festival and the 2011 High Times Cannabis Cup.

Despite its versatility and popularity, this isn’t a strain the newly initiated should rush into. Instead, those with a sensitivity to high THC levels should tread lightly. The Holy Grail Kush can be a bit overwhelming for a newbie or someone with low tolerance.

However, those with a tolerance for high THC levels may enjoy this cannabis type. It has some CBD, and that may be why its impact isn’t at all harsh. Many users cite that Holy Grail has a fresh and mellow letdown, with a buzz that isn’t jarring.

All in all, users state that their high with this strain is mostly enjoyable. However, many do consider this strain a spicy smoke, but others enjoy its nuanced flavor and complex aromas.

Holy Grail Kush has a complex and intriguing aroma profile. Many users state that it has sharp lemon and citrusy notes, along with a dash of sweetness. Other users contend that there is a hint of diesel and dank. Users cite a lingering tang of pine along with a surprising hint of fresh, roasted coffee.

Some complain that the aroma is brash and odoriferous, with the ability to fill a room quickly. Most enthusiasts of the strain do recommend a nicely-ventilated area for this strain. However, it does exhibit a floral bouquet scent. Remnants of wildflowers, earth, and wood run throughout the strain as it burns, giving it a quietly rustic feel.

Holy Grail strain contains a blend of delicious and surprising flavors. It first begins with a hefty dose of fresh, tart citrusy lemon. Users can also detect hints of sweet candy, a characteristic that isn’t too cloying and has some intricate notes. Many of these notes include a floral bouquet, including honeysuckle, along with tinges of pine and wood.

Some users state that it has a deep, herbaceous flavor. Others may taste a blend of earth and a spicy heat that gives it a complex depth some users enjoy.

Holy Grail Kush has an appearance that is eye-catching and intriguing. It hosts a variety of visually appealing and psychedelic colors. Its nuggets run the gamut between dark and light green. It comes dappled with yellows and orange pistils. The entire structure of the strain is sprinkled heavily with a layer of sugary, white trichomes.

Holy Grail Kush seeds are robust and resilient. They can stand up exceptionally well to a variety of environmental pressures. These include spiders, mites, bacteria, mildew, mold, and even extreme heat or cold. This strain is also resistant to breaking.

It also handles certain viruses well and doesn’t need as much tending as some other strains. This may prove an excellent choice for busy growers seeking a less demanding cannabis type. While some cannabis plant strains can only thrive outdoors or inside, this strain is relatively versatile and grows both indoors and outdoors.

It is ready for harvest in about 9-10 weeks. For growers with a little more room to spare, this strain may be ideal. It grows medium height between 30 and 80 inches. However, it does require some maintenance, and to get the highest yield, growers may engage in some techniques.

Holy Grail Kush responds well to trimming, as it will encourage stretching and will also allow for proper air and light circulation. Other techniques may include a screen of green and sea of green, as well as tenting, hydroponics, and frequent soil examination along with nutrient boosts.